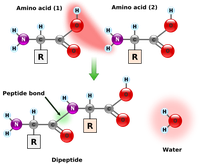 Figure 1. Formation of a peptide bond 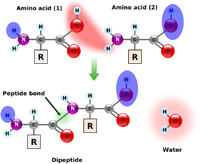 More generally, a residue is a molecule from which a water molecule has been removed; every amino acid in a protein are residues except the leftmost and the rightmost ones. These outermost amino acids are special in that one has an "unstarted" peptide bond, and the other has an "unfinished" peptide bond. Between them, the two molecules have a single "extra" molecule of water (see the atoms marked in blue in Figure 2). Thus, the mass of a protein is the sum of masses of all its residues plus the mass of a single water molecule.

There are two standard ways of computing the mass of a residue by summing the masses of its individual atoms. Its monoisotopic mass is computed by using the principal (most abundant) isotope of each atom in the amino acid, whereas its average mass is taken by taking the average mass of each atom in the molecule (over all naturally appearing isotopes).

In the following several problems on applications of mass spectrometry, we avoid the complication of having to distinguish between residues and non-residues by only considering peptides excised from the middle of the protein. This is a relatively safe assumption because in practice, peptide analysis is often performed in tandem mass spectrometry. In this special class of mass spectrometry, a protein is first divided into peptides, which are then broken into ions for mass analysis.

The standard weight assigned to each member of the 20-symbol amino acid alphabet is the monoisotopic mass of the corresponding amino acid.

Given: A protein string of length at most 1000 aa.

Return: The total weight of . Consult the monoisotopic mass table.