An amino acid is a molecule forming the monomer units of peptides and by extension proteins. A collection of 20 amino acids commonly occur in most species (with the amino acid selenocysteine appearing much more rarely); as a result, the letters of the English alphabet except for 'B', 'J', 'O', 'U', 'X', and 'Z' are used to encode amino acids. 'U' is called up for the rare case in which selenocysteine appears.

The chemical structure of amino acids is illustrated in the figure below. A central carbon atom is bonded on four sides. On one side is a carboxyl group (COOH); on its opposite side can be found an amino group (). The third side possesses a lone hydrogen atom (H), leaving the fourth side for the amino acid's so-called side chain (indicated as 'R' in the figure below). Because the side chain is the only component of the molecule that differs between amino acids, it therefore completely determines the amino acid's chemical structure. 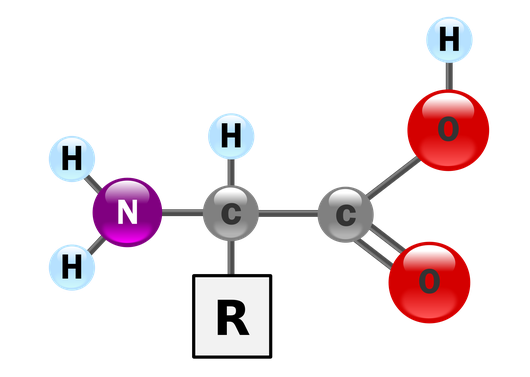 In a dehydration reaction, the hydroxyl molecule (OH) belonging to the carboxyl group of one amino acid splits off with the hydrogen atom of another amino acid to form a water molecule, resulting in a peptide bond between the amino acids. Polypeptides are formed as a chain of peptide bonds accumulates.

Amino acids are classified as aromatic or nonaromatic depending on whether or not their side-chain contains a carbon ring, and they may be electrically charged or neutral. The side chains of four amino acids (including selenocysteine) have special chemical properties that set them apart from those of other amino acids. The table below divides amino acids according to their properties. 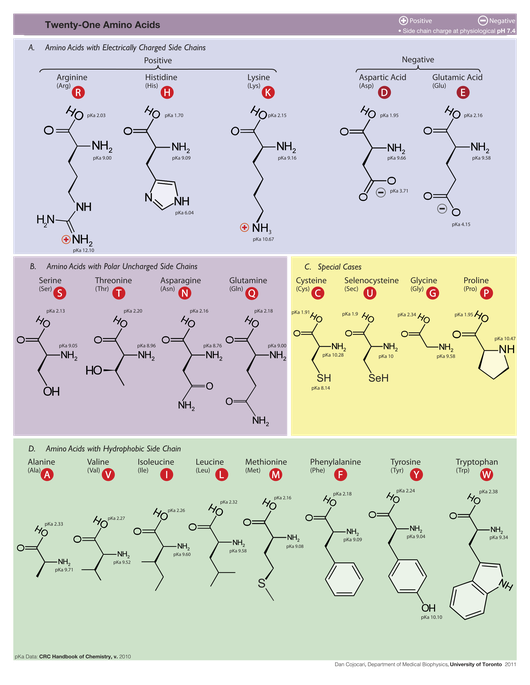 A protein's properties are completely determined by the accumulated properties of its constituent amino acids. In other words, like the case of nucleic acids, the primary structure of the protein (i.e., the order of its amino acids) is, at least theoretically, all that is needed to fully describe the protein.

Some individual amino acids are important to the function of an organism. For example, glutamic acid (glutamate) is a common signal transmitting molecules in neurons.