Ribose nucleic acid (RNA) is one of two naturally occurring nucleic acids and is transcribed from DNA for the purposes of conveying the information contained in DNA to facilitate higher functions in the cell.

Although it relies on DNA for its existence, RNA was actually discovered first in the cell (by Friedrich Miescher in 1868). RNA differs structurally from DNA in that it is single-stranded, its sugar is ribose, and it possesses the nucleobase uracil instead of thymine (during RNA transcription, thymine is in fact replaced with uracil).

There are actually many different varieties of RNA molecules. The pre-mRNA molecule is transcribed from DNA, which then is formed into a mRNA molecule during RNA splicing, which is used as a template for the construction of peptides (via the genetic code). The tRNA molecule is shaped like a clover leaf and possesses an amino acid at one end and an anticodon (three RNA nucleotides) at the other end; it serves as a template for translating the codon matching the anticodon into the unique corresponding amino acid during peptide construction. 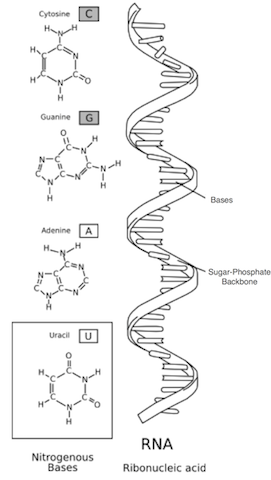