Genetic recombination is the exchange of similar parts of homologous chromosomes during chromosome pairing in meiosis. When the chromosomes pair, they intertwine and can become stuck together, exchanging DNA in the process; for this reason, recombination is often known as "crossing over."

The figure below shows an illustration of two chromosomes crossing over from Thomas Hunt Morgan's work in 1916. Part of the black chromosome becomes exchanged with part of the white chromosome. 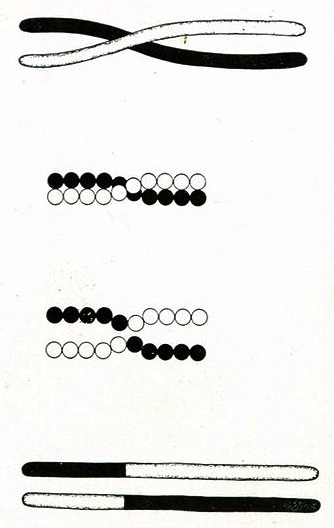 Recombination leads to the shuffling of genes in offspring, which will essentially possess a unique combination of alleles. For example, consider the figure below, which isolates crossing over to a few nucleotide positions, which we assume correspond to alleles. If only the red chromosome or blue chromosome could be inherited, then the offspring would receive all alleles in one lump sum, with no possibility for variation. In terms of evolution, this would be inefficient; for example, say that one of the two 'G's appearing in the red chromosome corresponds to a very advantageous SNP, but that the other 'G' encodes a genetic disorder. Without crossing over, there would be no possible way for an organism to inherit the helpful mutation without also receiving the harmful one; the two 'G's have been separated in the lower pair of chromosomes after crossing over. Accordingly, crossing over is a vital source of genetic variation and a powerful basis for effecting natural selection. 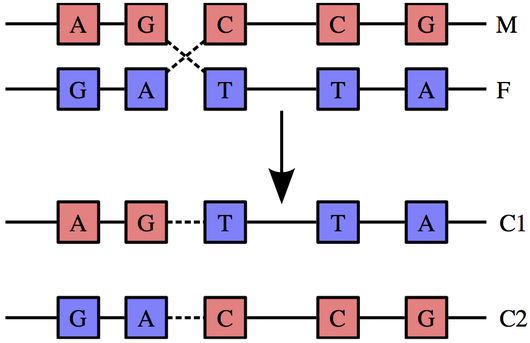 Consider adjacent symbols in the figure above, as compared to symbols on opposite ends of the chromosome; the latter are far more likely to be separated during crossing over. In general, the closer that two genes are located on the same chromosome, the less likely that crossing over will separate them. Thus, genes can be inherited together with differing probabilities, which establishes the principle of genetic linkage.