Meiosis is a process of cell division in eukaryotes that produces haploid gametes. In most animals, including humans, meiosis begins with a single diploid cell containing two copies of each homologous chromosome pair - one from the organism's mother and one from its father - and produces four haploid cells, each containing one copy of each chromosome. For example, in humans, 23 pairs of chromosomes in two cells combine to give 92 total chromosomes, and then the cells are split into four gametes, each containing 23 unpaired chromosomes.

During meiosis, chromosomes undergo a process called recombination, during which homologs pair off and intertwine, exchanging DNA in the process. As a result, each of the resulting chromosomes in the gamete cells contains a unique mixture of maternal and paternal DNA. The result is that while chromosomes are passed down unaltered from parents to children, they are blended before they are passed to the next generation.

Meiosis is depicted in the figure below. The diploid organism begins with four chromosomes, two from the mother (blue) and two from the father (red). When homologous chromosomes form, one corresponds to each color. They then exchange information, resulting in mixed chromosomes. It is these recombined chromosomes that are duplicated, then split into four gametes to be passed onto offspring during sexual reproduction. 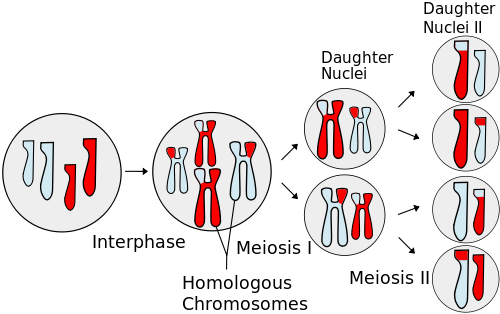 In humans, the Y chromosome is an exception to the rule of recombination, as it does not have a partner to intertwine with during meiosis. Each man's Y chromosome is therefore largely the same as his paternal ancestors; as a result, studying markers on the Y chromosome offers an interesting way to study male ancestry.

Recombination during meiosis serves a practical purpose; if we imagine an organism with a very beneficial mutation and a very harmful mutation on the same chromosome, it would be impossible to pass on one of these mutations without the other to offspring without recombination. With this in mind, evolutionary biologists believe that many mutations have their negative effects "smoothed out" by the accumulated effect of recombination, reinforced by natural selection.