Because RNA is single-stranded, you may have wondered if the cytosine and guanine bases bond to each other like in DNA. The answer is yes, as do adenine and uracil, and the resulting base pairs define the secondary structure of the RNA molecule; recall that its primary structure is just the order of its bases.

In the greater three-dimensional world, the base pairing interactions of an RNA molecule cause it to twist around on itself in a process called RNA folding. When two complementary intervals of bases located close to each other on the strand bond to each other, they form a structure called a hairpin loop (or stem loop), shown in Figure 1.

The same RNA molecule may base pair differently at different points in time, thus adopting many different secondary structures. Our eventual goal is to classify which of these structures are practically feasible, and which are not. To this end, we will ask natural combinatorial questions about the number of possible different RNA secondary structures. In this problem, we will first consider the (impractical) simplified case in which every nucleotide forms part of a base pair in the RNA molecule.

Figure 3. A graph containing 10 nodes; the five edges forming a perfect matching on these nodes are highlighted in red. 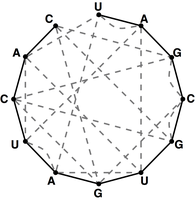 Figure 4. The bonding graph for the RNA string s = UAGCGUGAUCAC. 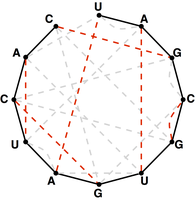 Figure 5. A perfect matching on the basepair edges is highlighted in red and represents a candidate secondary structure for the RNA strand.

A matching in a graph is a collection of edges of for which no node belongs to more than one edge in the collection. See Figure 2 for examples of matchings. If contains an even number of nodes (say ), then a matching on is perfect if it contains edges, which is clearly the maximum possible. An example of a graph containing a perfect matching is shown in Figure 3.

First, let denote the complete graph on labeled nodes, in which every node is connected to every other node with an edge, and let denote the total number of perfect matchings in . For a given node , there are ways to join to the other nodes in the graph, after which point we must form a perfect matching on the remaining nodes. This reasoning provides us with the recurrence relation ; using the fact that is 1, this recurrence relation implies the closed equation .

Given an RNA string , a bonding graph for is formed as follows. First, assign each symbol of to a node, and arrange these nodes in order around a circle, connecting them with edges called adjacency edges. Second, form all possible edges {A, U} and {C, G}, called basepair edges; we will represent basepair edges with dashed edges, as illustrated by the bonding graph in Figure 4.

Return: The total possible number of perfect matchings of basepair edges in the bonding graph of .