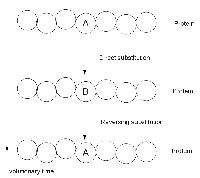 In “Fixing an Inconsistent Character Set”, we mentioned how the construction of a phylogeny can be complicated by a the reversion of a character to a past state. For that matter, in calculating Hamming distance and edit distance, the assumption of parsimony required us to assume that if some nucleotide base or amino acid is aligned with an identical symbol in two genetic strings, then it has not changed on the evolutionary path between the two taxa.

Unfortunately, with the possible exception of experimental evolution in bacteria, we lack the luxury of knowing the ancestral state of a nucleic acid strand. Instead, we must infer its most probable ancestor from homologous strands. To do so, we may use characters to construct a phylogeny (see “Character-Based Phylogeny”), then apply alignment-based phylogeny to infer strings for the tree's internal nodes (see “Alignment-Based Phylogeny”). Only once we have an adequate picture of the entire phylogeny, including its internal nodes, can we hope to identify reversing substitutions.

For a rooted tree whose internal nodes are labeled with genetic strings, our goal is to identify reversing substitutions in . Assuming that all the strings of have the same length, a reversing substitution is defined formally as two parent-child string pairs and along with a position index , where:

Given: A rooted binary tree with labeled nodes in Newick format, followed by a collection of at most 100 DNA strings in FASTA format whose labels correspond to the labels of . We will assume that the DNA strings have the same length, which does not exceed 400 bp).

Return: A list of all reversing substitutions in (in any order), with each substitution encoded by the following three items: