Connectivity in undirected graphs is pretty straightforward: a graph that is not connected can be decomposed in a natural and obvious manner into several connected components. Depth-first search does this handily, with each restart marking a new connected component.

In directed graphs, connectivity is more subtle. In some primitive sense, the directed graph of the following graph is “connected”—it can’t be “pulled apart,” so to speak, without breaking edges. But this notion is hardly interesting or informative. The graph cannot be considered connected, because for instance there is no path from to or from to . 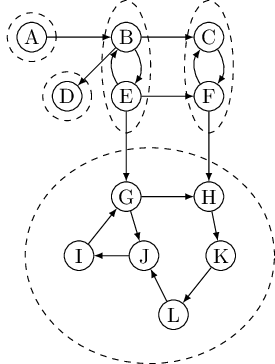 Property Every directed graph is a dag of its strongly connected components. 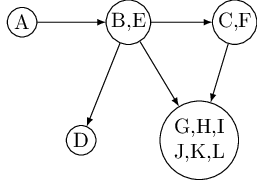 This tells us something important: The connectivity structure of a directed graph is two-tiered. At the top level we have a dag, which is a rather simple structure—for instance, it can be linearized. If we want finer detail, we can look inside one of the nodes of this dag and examine the full-fledged strongly connected component within.

The decomposition of a directed graph into its strongly connected components is very informative and useful. It turns out, fortunately, that it can be found in linear time by making further use of depth-first search. The algorithm is based on some properties we have already seen but which we will now pinpoint more closely.

Property 1 If the subroutine is started at node , then it will terminate precisely when all nodes reachable from have been visited.

Property 2 The node that receives the highest number in a depth-first search must lie in a source strongly connected component.

This follows from the following more general property.

Proof. In proving Property 3, there are two cases to consider. If the depth-first search visits component before component , then clearly all of and will be traversed before the procedure gets stuck (see Property 1). Therefore the first node visited in will have a higher number than any node of . On the other hand, if gets visited first, then the depth-first search will get stuck after seeing all of but before seeing any of , in which case the property follows immediately. ∎ 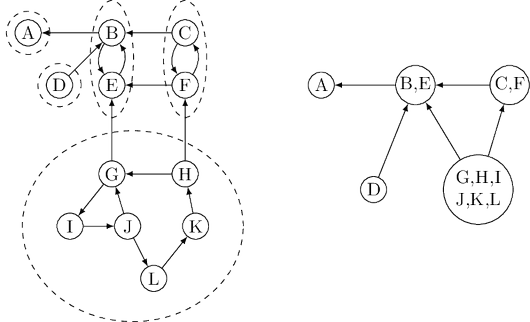 This algorithm is linear-time, only the constant in the linear term is about twice that of straight depth-first search. (Question: How does one construct an adjacency list representation of in linear time? And how, in linear time, does one order the vertices of by decreasing values?)