Depth-first search is a surprisingly versatile linear-time procedure that reveals a wealth of information about a graph. The most basic question it addresses is, What parts of the graph are reachable from a given vertex?

To understand this task, try putting yourself in the position of a computer that has just been given a new graph, say in the form of an adjacency list. This representation offers just one basic operation: finding the neighbors of a vertex. With only this primitive, the reachability problem is rather like exploring a labyrinth.

You start walking from a fixed place and whenever you arrive at any junction (vertex) there are a variety of passages (edges) you can follow. A careless choice of passages might lead you around in circles or might cause you to overlook some accessible part of the maze. Clearly, you need to record some intermediate information during exploration.

This classic challenge has amused people for centuries. Everybody knows that all you need to explore a labyrinth is a ball of string and a piece of chalk. The chalk prevents looping, by marking the junctions you have already visited. The string always takes you back to the starting place, enabling you to return to passages that you previously saw but did not yet investigate.

How can we simulate these two primitives, chalk and string, on a computer? The chalk marks are easy: for each vertex, maintain a Boolean variable indicating whether it has been visited already. As for the ball of string, the correct cyberanalog is a stack. After all, the exact role of the string is to offer two primitive operations—unwind to get to a new junction (the stack equivalent is to push the new vertex) and rewind to return to the previous junction (pop the stack).

Instead of explicitly maintaining a stack, we will do so implicitly via recursion (which is implemented using a stack of activation records). The resulting algorithm is shown in the following picture.

The and procedures are optional, meant for performing operations on a vertex when it is first discovered and also when it is being left for the last time. We will soon see some creative uses for them.

More immediately, we need to confirm that always works correctly. It certainly does not venture too far, because it only moves from nodes to their neighbors and can therefore never jump to a region that is not reachable from . But does it find all vertices reachable from ? Well, if there is some that it misses, choose any path from to , and look at the last vertex on that path that the procedure actually visited. Call this node , and let be the node immediately after it on the same path.

So was visited but was not. This is a contradiction: while the explore procedure was at node , it would have noticed and moved on to it.

Incidentally, this pattern of reasoning arises often in the study of graphs and is in essence a streamlined induction. A more formal inductive proof would start by framing a hypothesis, such as “for any , all nodes within hops from get visited.” The base case is as usual trivial, since is certainly visited. And the general case—showing that if all nodes hops away are visited, then so are all nodes hops away—is precisely the same point we just argued.

The following figure shows the result of running on our earlier example graph, starting at node , and breaking ties in alphabetical order whenever there is a choice of nodes to visit. The solid edges are those that were actually traversed, each of which was elicited by a call to explore and led to the discovery of a new vertex. For instance, while was being visited, the edge -- was noticed and, since was as yet unknown, was traversed via a call to . These solid edges form a tree (a connected graph with no cycles) and are therefore called tree edges. The dotted edges were ignored because they led back to familiar terrain, to vertices previously visited. They are called back edges. 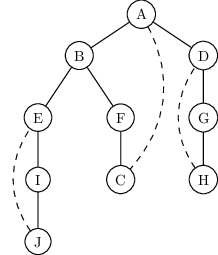 The procedure visits only the portion of the graph reachable from its starting point. To examine the rest of the graph, we need to restart the procedure elsewhere, at some vertex that has not yet been visited. The algorithm of shown below, called depth-first search (DFS), does this repeatedly until the entire graph has been traversed.

The first step in analyzing the running time of DFS is to observe that each vertex is ’d just once, thanks to the array (the chalk marks). During the exploration of a vertex, there are the following steps: 1. Some fixed amount of work—marking the spot as visited, and the . 2. A loop in which adjacent edges are scanned, to see if they lead somewhere new. This loop takes a different amount of time for each vertex, so let’s consider all vertices to- gether. The total work done in step 1 is then . In step 2, over the course of the entire DFS, each edge is examined exactly twice, once during and once during . The overall time for step 2 is therefore and so the depth-first search has a running time of , linear in the size of its input. This is as efficient as we could possibly hope for, since it takes this long even just to read the adjacency list.

The following shows the outcome of depth-first search on a -node graph, once again breaking ties alphabetically (ignore the pairs of numbers for the time being). The outer loop of DFS calls three times, on , , and finally . As a result, there are three trees, each rooted at one of these starting points. Together they constitute a forest. 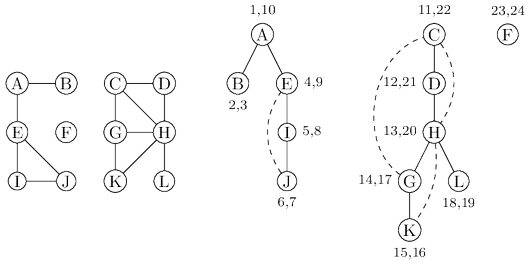 Depth-first search can be easily used to check whether an undirected graph is connected and, more generally, to split a graph into connected components.

We have seen how depth-first search—a few unassuming lines of code—is able to uncover the connectivity structure of an undirected graph in just linear time. But it is far more versatile than this. In order to stretch it further, we will collect a little more information during the exploration process: for each node, we will note down the times of two important events, the moment of first discovery (corresponding to ) and that of final departure (). The figure above shows these numbers for our earlier example, in which there are events. The fifth event is the discovery of . The st event consists of leaving behind for good. One way to generate arrays and with these numbers is to define a simple counter , initially set to , which gets updated as follows.

These timings will soon take on larger significance. Meanwhile, you might have noticed from the graph above that:

Property For any nodes and , the two intervals and are either disjoint or one is contained within the other.

Why? Because is essentially the time during which vertex was on the stack. The last-in, first-out behavior of a stack explains the rest.

Our depth-first search algorithm can be run verbatim on directed graphs, taking care to traverse edges only in their prescribed directions. The following figure shows an example and the search tree that results when vertices are considered in lexicographic order.

In further analyzing the directed case, it helps to have terminology for important relationships between nodes of a tree. is the root of the search tree; everything else is its descendant. Similarly, has descendants , , and , and conversely, is an ancestor of these three nodes. The family analogy is carried further: is the parent of , which is its child.

For undirected graphs we distinguished between tree edges and nontree edges. In the directed case, there is a slightly more elaborate taxonomy: 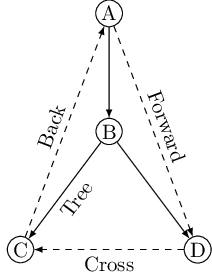 The graph above has two forward edges, two back edges, and two cross edges. Can you spot them?

Ancestor and descendant relationships, as well as edge types, can be read off directly from and numbers. Because of the depth-first exploration strategy, vertex is an ancestor of vertex exactly in those cases where is discovered first and is discovered during . This is to say , which we can depict pictorially as two nested intervals:

The case of descendants is symmetric, since is a descendant of if and only if is an ancestor of . And since edge categories are based entirely on ancestor-descendant relationships, it follows that they, too, can be read off from and numbers. Here is a summary of the various possibilities for an edge : 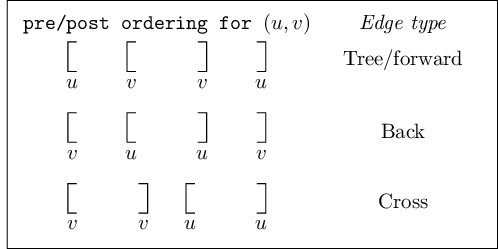 You can confirm each of these characterizations by consulting the diagram of edge types. Do you see why no other orderings are possible?

Using the just introduced edge types one can check whether a given graph is acyclic or not in linear time. Depth-first search can also be used to find a linearization of a given dag as well as splitting any directed graph into strongly connected components.