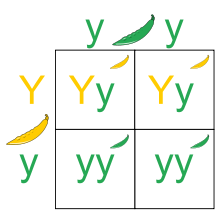 Modern laws of inheritance were first described by Gregor Mendel (an Augustinian Friar) in 1865. The contemporary hereditary model, called blending inheritance, stated that an organism must exhibit a blend of its parent's traits. This rule is obviously violated both empirically (consider the huge number of people who are taller than both their parents) and statistically (over time, blended traits would simply blend into the average, severely limiting variation).

Mendel, working with thousands of pea plants, believed that rather than viewing traits as continuous processes, they should instead be divided into discrete building blocks called factors. Furthermore, he proposed that every factor possesses distinct forms, called alleles.

In what has come to be known as his first law (also known as the law of segregation), Mendel stated that every organism possesses a pair of alleles for a given factor. If an individual's two alleles for a given factor are the same, then it is homozygous for the factor; if the alleles differ, then the individual is heterozygous. The first law concludes that for any factor, an organism randomly passes one of its two alleles to each offspring, so that an individual receives one allele from each parent.

The different possibilities describing an individual's inheritance of two alleles from its parents can be represented by a Punnett square; see Figure 1 for an example.

Figure 2. The probability of any outcome (leaf) in a probability tree diagram is given by the product of probabilities from the start of the tree to the outcome. For example, the probability that X is blue and Y is blue is equal to (2/5)(1/4), or 1/10.

Probability is the mathematical study of randomly occurring phenomena. We will model such a phenomenon with a random variable, which is simply a variable that can take a number of different distinct outcomes depending on the result of an underlying random process.

For example, say that we have a bag containing 3 red balls and 2 blue balls. If we let represent the random variable corresponding to the color of a drawn ball, then the probability of each of the two outcomes is given by and .

Random variables can be combined to yield new random variables. Returning to the ball example, let model the color of a second ball drawn from the bag (without replacing the first ball). The probability of being red depends on whether the first ball was red or blue. To represent all outcomes of and , we therefore use a probability tree diagram. This branching diagram represents all possible individual probabilities for and , with outcomes at the endpoints ("leaves") of the tree. The probability of any outcome is given by the product of probabilities along the path from the beginning of the tree; see Figure 2 for an illustrative example.

Given: Three positive integers , , and , representing a population containing organisms: individuals are homozygous dominant for a factor, are heterozygous, and are homozygous recessive.

Return: The probability that two randomly selected mating organisms will produce an individual possessing a dominant allele (and thus displaying the dominant phenotype). Assume that any two organisms can mate.

Consider simulating inheritance on a number of small test cases in order to check your solution.