The Fibonacci numbers grow almost as fast as the powers of : for example, is over a million, and is already digits long! In general, . No other sequence of numbers has been studied as extensively, or applied to more fields: biology, demography, art, architecture, music, to name just a few. And, together with the powers of , it is computer science’s favorite sequence.

The Fibonacci numbers are generated by the following simple rule

Given: A positive integer .

Return: The value of . 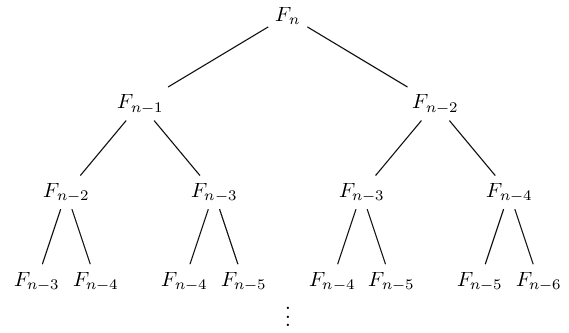 Figure 1. A tree showing the branching, exponential nature of recursive calls in fib1. The bottom row of the tree has calls; once the row grows to depth 20, there are 1,048,576 recursive calls.

One idea is to slavishly implement the recursive definition of . Here is the pseudocode of the resulting algorithm:

Let be the number of steps needed to compute ; what can we say about this function? For starters, if , then the procedure halts almost immediately, after just a couple of steps. Therefore, for . For larger values of , there are two recursive calls of , taking respective times and , plus three computer steps (checks on the value of and a final addition). Therefore, Compare this to the recurrence relation for : we immediately see that .

This is very bad news: the running time of the algorithm grows as fast as the Fibonacci numbers themselves! is exponential in , which implies that the algorithm is impractically slow except for very small values of .

Let’s try to understand why is so slow. Figure 1 shows the cascade of recursive invocations triggered by a single call to . Notice that many computations are repeated! A more sensible scheme would store the intermediate results—the values —as soon as they become known.

As with , the correctness of this algorithm is self-evident because it directly uses the definition of . How long does it take? The inner loop consists of a single computer step and is executed times. Therefore the number of computer steps used by is linear in . From exponential we are down to polynomial, a huge breakthrough in running time. It is now perfectly reasonable to compute or even .

To better feel the difference between polynomial and exponential time, try to compute by using the following visualization by David Galles: http://www.cs.usfca.edu/~galles/visualization/DPFib.html. Selecting "Fibonacci Recursive" shows the enormous number of recursive calls that the program tries to make in . Stop the animation when you get tired of watching it, and instead click "Fibonacci Table" to see just how much quicker using is. (Note however that a slightly different definition is used there: .)