Polymerase chain reaction (PCR), or DNA amplification, is a technology that allows researchers to obtain a huge number of copies of the region of a particular DNA molecule. It uses short DNA fragments called primers, which are complementary to the target sequence, as well as a DNA polymerase enzyme that is able to replicate DNA in vitro (i.e., in sterile lab conditions).

The basic outline of the PCR procedure consists of three steps:

1) Denaturation. The sample DNA, DNA polymerase, and primers to be used are mixed and heated to 94–98 °C. The double-stranded DNA molecule decomposes into single strands, and all enzymatic reactions stop.

2) Annealing. The temperature of the mixture is lowered to 50–65 °C. Primers anneal to the single strands of DNA in complementary regions.

3) Elongation. The temperature is raised to 75–80 °C, optimal for DNA polymerase, which starts at the regions where the primers have binded and begins to build a second strand complementary to each DNA template in the 3' to 5' direction of the template.

The figure below shows an outline of the PCR reaction, with each stage numbered. Blue lines represent the DNA template; red arrows represent primers; the green circle represents DNA polymerase.

These steps are repeated 30 or 40 times; nowadays, PCR is performed on an automated thermocyclers, which can heat and cool the reaction tubes rapidly. After each elongation step, the number of copies doubles, as each double-stranded DNA molecule melts to single strands and is duplicated by DNA polymerase. As a result, the total amount of DNA grows exponentially, as shown by the figure below; in theory, after 30 iterations of PCR, we would observe over a billion times our initial amount of DNA. 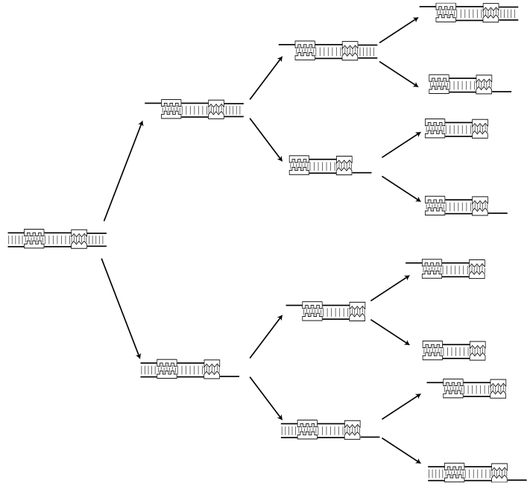 PCR represented a landmark contribution to biology for its ability to amplify DNA and create a DNA profile from even the smallest genetic samples. Because of its relatively low cost, it was an immediate tour de force in genetics applications, most notably forensics. For the invention of PCR in 1983, Kary Mullis was awarded a share of the Nobel Prize for Chemistry in 1993.