Two random variables are called "dependent" if the probability of events associated with one variable influence the distribution of probabilities of the other variable, and vice-versa. The word "influence" is somewhat misleading, as causation is not a necessary component of dependence.

For example, consider drawing two balls from a hat containing three red balls and two blue balls. If is the random variable associated with the color of the first ball, and is the color of the second ball, then clearly the value of and will influence each other: if we draw a red ball first, then the probabilities for are different than what they would be if we draw a blue ball first. Below is the probability tree diagram for the two drawings. 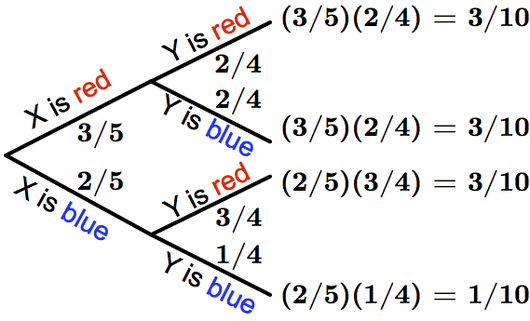 There are two ways of stating dependence mathematically. First, we might say that and are dependent if they are not independent. In other words, there exist events and containing outcomes of and , respectively, such that is not equal to . In the case of drawing balls, let be the outcome of the first ball drawn being blue, and be the outcome of the second ball drawn being blue. Then is 1/10, although is 2/5 and is 2/5.

An equivalent way of saying that and are dependent is if there are events and containing respective outcomes corresponding to and such that the conditional probability is not equal to . Using the same events for our example variables and above, we can see that while is 2/5, is , or 1/4. This calculation makes sense, since if we know that the second ball drawn is blue, odds are much better that the first ball was red than blue.