Alternative splicing is the phenomenon in which exons from a molecule of pre-mRNA can be assembled in different ways to yield a final mRNA molecule for translation. As a result, the proteins translated from differently spliced pre-mRNA may take a number of similar structures, called isoforms.

Alternative splicing serves an important evolutionary purpose because it may equip the same gene with more than one practical function, allowing much more information to be expressed on the genome; in fact, about 95% of human genes are commonly spliced in more than one way, as 30,000 human genes wind up producing 100,000 differently transcribed strands of mRNA.

The most common form of alternative splicing is exon skipping (depicted in the figure below), in which each exon may or may not be selected for assembly into mRNA. 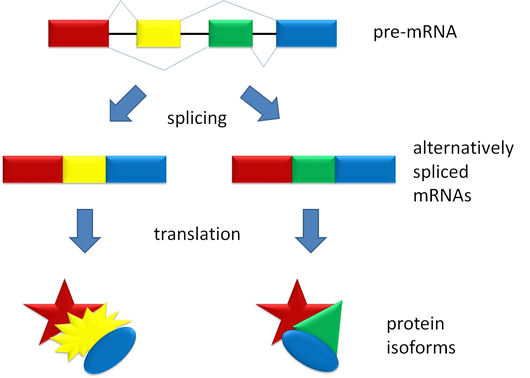 Errors in alternative splicing have a mutational effect and can lead to a variety of genetic disorders.