Breadth-first search treats all edges as having the same length. This is rarely true in applications where shortest paths are to be found. For instance, suppose you are driving from San Francisco to Las Vegas, and want to find the quickest route. The figure below shows the major highways you might conceivably use. Picking the right combination of them is a shortest-path problem in which the length of each edge (each stretch of highway) is important. 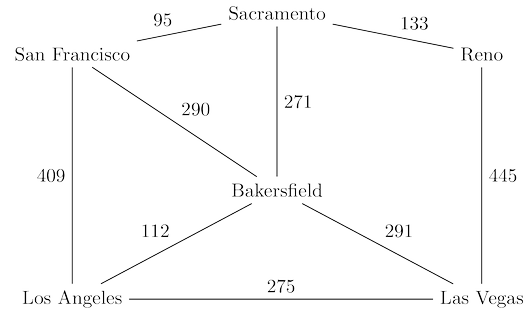 We annotate every edge with a length . If , we will sometimes also write or . These ’s do not have to correspond to physical lengths. They could denote time (driving time between cities) or money (cost of taking a bus), or any other quantity that we would like to conserve.

An adaptation of breadth-first search

Here is a simple trick for converting into something BFS can handle: break ’s long edges into unit-length pieces, by introducing “dummy” nodes. The figure below shows an example of this transformation. To construct the new graph ,

For any edge of , replace it by edges of length , by adding dummy nodes between and .

Graph contains all the vertices that interest us, and the distances between them are exactly the same as in . Most importantly, the edges of all have unit length. Therefore, we can compute distances in by running BFS on .

If efficiency were not an issue, we could stop here. But when has very long edges, the it engenders is thickly populated with dummy nodes, and the BFS spends most of its time diligently computing distances to these nodes that we don’t care about at all.

To see this more concretely, consider the graphs and of the figure below, and imagine that the BFS, started at node of , advances by one unit of distance per minute. For the first minutes it tediously progresses along and , an endless desert of dummy nodes. Is there some way we can snooze through these boring phases and have an alarm wake us up whenever something interesting is happening—specifically, whenever one of the real nodes (from the original graph ) is reached?

We do this by setting two alarms at the outset, one for node , set to go off at time , and one for , at time . These are estimated times of arrival, based upon the edges currently being traversed. We doze off and awake at to find has been discovered. At this point, the estimated time of arrival for B is adjusted to and we change its alarm accordingly.

More generally, at any given moment the breadth-first search is advancing along certain edges of , and there is an alarm for every endpoint node toward which it is moving, set to go off at the estimated time of arrival at that node. Some of these might be overestimates because BFS may later find shortcuts, as a result of future arrivals elsewhere. In the preceding example, a quicker route to was revealed upon arrival at . However, nothing interesting can possibly happen before an alarm goes off. The sounding of the next alarm must therefore signal the arrival of the wavefront to a real node by BFS. At that point, BFS might also start advancing along some new edges out of , and alarms need to be set for their endpoints.

The following “alarm clock algorithm” faithfully simulates the execution of BFS on .

The alarm clock algorithm computes distances in any graph with positive integral edge lengths. It is almost ready for use, except that we need to somehow implement the system of alarms. The right data structure for this job is a priority queue (usually implemented via a heap), which maintains a set of elements (nodes) with associated numeric key values (alarm times) and supports the following operations:

The first two let us set alarms, and the third tells us which alarm is next to go off. Putting this all together, we get Dijkstra’s algorithm. 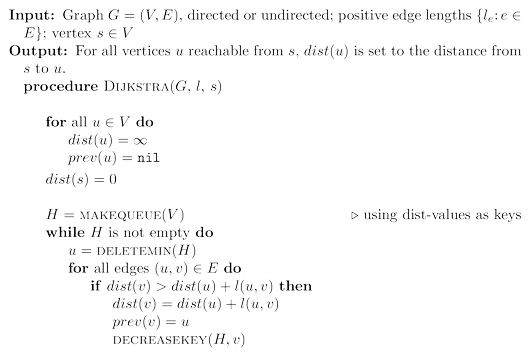 In the code, refers to the current alarm clock setting for node . A value of means the alarm hasn’t so far been set. There is also a special array, , that holds one crucial piece of information for each node : the identity of the node immediately before it on the shortest path from to . By following these back-pointers, we can easily reconstruct shortest paths, and so this array is a compact summary of all the paths found. A full example of the algorithm’s operation, along with the final shortest-path tree, is shown below. 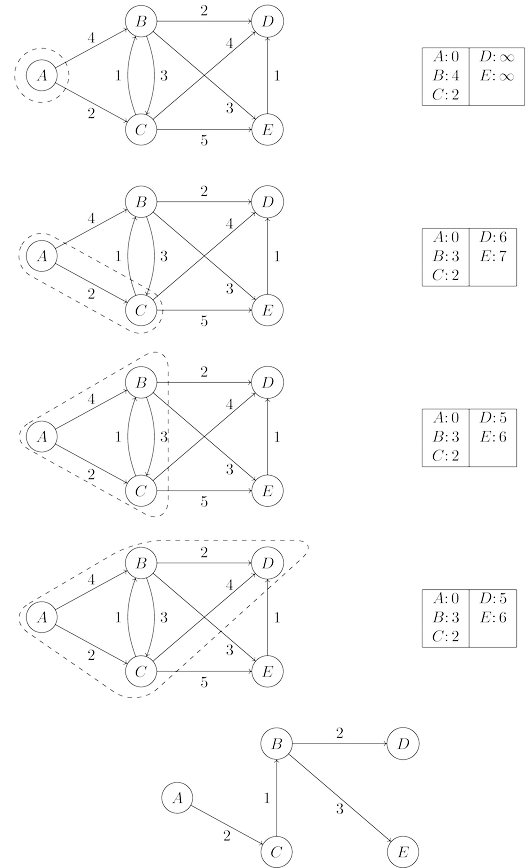 In summary, we can think of Dijkstra’s algorithm as just BFS, except it uses a priority queue instead of a regular queue, so as to prioritize nodes in a way that takes edge lengths into account. This viewpoint gives a concrete appreciation of how and why the algorithm works, but there is a more direct, more abstract derivation that doesn’t depend upon BFS at all. We now start from scratch with this complementary interpretation.

Here’s a plan for computing shortest paths: expand outward from the starting point , steadily growing the region of the graph to which distances and shortest paths are known. This growth should be orderly, first incorporating the closest nodes and then moving on to those further away. More precisely, when the “known region” is some subset of vertices that includes , the next addition to it should be the node outside that is closest to . Let us call this node ; the question is: how do we identify it?

To answer, consider , the node just before in the shortest path from to :

Since we are assuming that all edge lengths are positive, must be closer to than is. This means that is in —otherwise it would contradict ’s status as the closest node to outside . So, the shortest path from to is simply a known shortest path extended by a single edge.

But there will typically be many single-edge extensions of the currently known shortest paths; which of these identifies ? 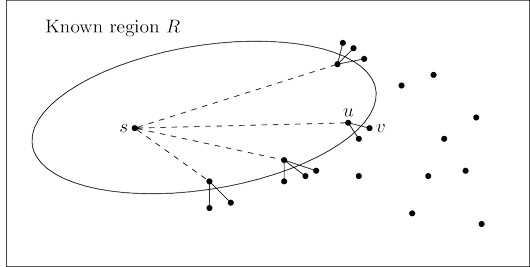 The answer is, the shortest of these extended paths. Because, if an even shorter single-edge-extended path existed, this would once more contradict ’s status as the node outside closest to . So, it’s easy to find : it is the node outside for which the smallest value of is attained, as ranges over . In other words, try all single-edge extensions of the currently known shortest paths, find the shortest such extended path, and proclaim its endpoint to be the next node of .

We now have an algorithm for growing by looking at extensions of the current set of shortest paths. Some extra efficiency comes from noticing that on any given iteration, the only new extensions are those involving the node most recently added to region . All other extensions will have been assessed previously and do not need to be recomputed. In the following pseudocode, is the length of the currently shortest single-edge-extended path leading to ; it is for nodes not adjacent to .

To justify this algorithm formally, we would use a proof by induction, as with breadth-first search. Here’s an appropriate inductive hypothesis.

The base case is straightforward (with ), and the details of the inductive step can be filled in from the preceding discussion.

At the level of abstraction of pseudocode above, Dijkstra’s algorithm is structurally identical to breadth-first search. However, it is slower because the priority queue primitives are computationally more demanding than the constant-time ’s and ’s of BFS. Since takes at most as long as operations, we get a total of and operations. The time needed for these varies by implementation; for instance, a binary heap gives an overall running time of .

Which heap is best?

The running time of Dijkstra’s algorithm depends heavily on the priority queue implementation used. Here are the typical choices.

So for instance, even a naive array implementation gives a respectable time complexity of , whereas with a binary heap we get . Which is preferable?

This depends on whether the graph is sparse (has few edges) or dense (has lots of them). For all graphs, is less than . If it is , then clearly the array implementation is the faster. On the other hand, the binary heap becomes preferable as soon as dips below .

The last line in the table gives running times using a sophisticated data structure called a Fibonacci heap. Although its efficiency is impressive, this data structure requires considerably more work to implement than the others, and this tends to dampen its appeal in practice. We will say little about it except to mention a curious feature of its time bounds. Its operations take varying amounts of time but are guaranteed to average over the course of the algorithm. In such situations we say that the amortized cost of heap ’s is .