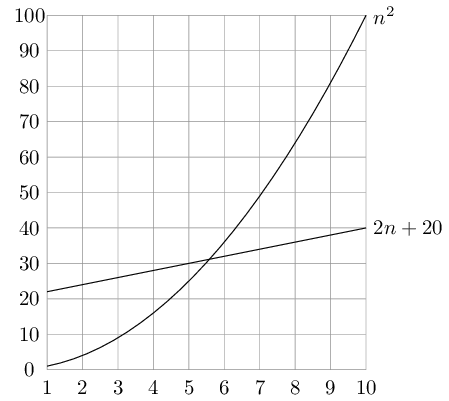 Saying is a very loose analog of “.” It differs from the usual notion of because of the constant , so that for instance . This constant also allows us to disregard what happens for small values of . For example, suppose we are choosing between two algorithms for a particular computational task. One takes steps, while the other takes steps (Figure 1). Which is better? Well, this depends on the value of . For , is smaller; thereafter, is the clear winner. In this case, scales much better as grows, and therefore it is superior.

This superiority is captured by the big-O notation: , because or all ; on the other hand, , since the ratio can get arbitrarily large, and so no constant will make the definition work. Now another algorithm comes along, one that uses steps. Is this better than ? Certainly, but only by a constant factor. The discrepancy between and is tiny compared to the huge gap between and . In order to stay focused on the big picture, we treat functions as equivalent if they differ only by multiplicative constants.

Returning to the definition of big-O, we see that : and of course , this time with .

Just as is an analog of , we can also define analogs of and as follows:

In the preceding example, and .

Big-O notation lets us focus on the big picture. When faced with a complicated function like , we just replace it with , where is as simple as possible. In this particular example we’d use , because the quadratic portion of the sum dominates the rest. Here are some commonsense rules that help simplify functions by omitting dominated terms:

Don’t misunderstand this cavalier attitude toward constants. Programmers and algorithm developers are very interested in constants and would gladly stay up nights in order to make an algorithm run faster by a factor of . But understanding algorithms at the basic level would be impossible without the simplicity afforded by big-O notation.