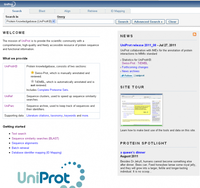 Figure 1. Screenshot of the UniProt homepage.

Proteins are identified in different labs around the world, and data about them is gathered into freely accessible databases. A central repository for protein data is UniProt, a comprehensive high-quality database established by an international consortium. UniProt provides detailed protein annotation, including function description, domain structure, and post-translational modifications. It also supports protein similarity search, taxonomy analysis, and literature citations. See Figure 1 for a screenshot of the UniProt homepage.

UniProt is part of ExPASy, the resource portal of Swiss Institute of Bioinformatics. ExPASy provides access to numerous databases and software tools in different areas of the life sciences.

The most important component of UniProt is the UniProt Knowledgebase, or UniProtKB (see the help page here), a protein database partially curated by experts. UniProtKB comprises two major parts:

The National Center for Biotechnology Information (NCBI) also maintains protein data. Data equivalent to that of Swiss-Prot is part of the NCBI's RefSeq database (http://www.ncbi.nlm.nih.gov/RefSeq/), a curated collection of genetic sequences. RefSeq records are annotated by NCBI personnel, and they provide reliable information for genomic DNA along with RNA transcribed from DNA and the corresponding translated proteins. NCBI's equivalent project to TrEmbl is the NCBI Protein database, which is part of the larger GenBank database and holds unannotated protein sequences. If a nucleotide sequence contained in GenBank codes for protein, then the corresponding amino acid sequence is automatically annotated and included in the NCBI database with its own protein ID. The NCBI databases also recognize UniProt IDs as search terms.

The NCBI Protein Database can be found here.

The UniProt Knowledgebase can be found here.

You can see a complete description of a protein by entering its UniProt access ID into the site's query field. Equivalently, you may simply insert its ID (uniprot_id) directly into a UniProt hyperlink as follows:

For example, the data for protein B5ZC00 can be found at http://www.uniprot.org/uniprot/B5ZC00.

Swiss-Prot holds protein data as a structured .txt file. You can obtain it by simply adding .txt to the link:

Given: The UniProt ID of a protein.

ExPASy databases can be accessed automatically via Biopython’s Bio.ExPASy module. The function .get_sprot_raw will find a target protein by its ID.

We can obtain data from an entry by using the SwissProt module. The read() function will handle one SwissProt record and parse will allow you to read multiple records at a time.

Let's get the data for the B5ZC00 protein:

We now can check the list of attributes for the obtained Swiss-Prot record:

To see the list of references to other databases, we can check the .cross_references attribute of our record: